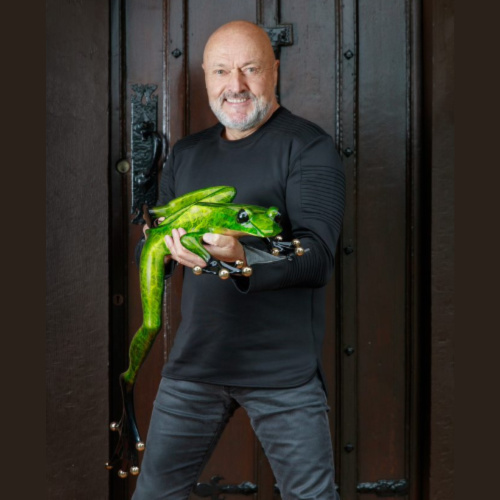 The world’s biggest-selling artist in bronze, Tim Cotterill is renowned and loved across the globe for his covetable and collectible creatures – usually the frogs which give him his nickname, ‘Frogman’, but birds, geckos and koi feature too.

Born in Leicester in 1950, Tim left school at the age of 15 and completed a six-year electrical engineering apprenticeship before moving onto landscape design and construction, and stonemasonry.

Always fascinated by metalworking and fast machines Tim started designing and building radical wheeled vehicles in his spare time, and using the leftover elements to create welded steel animals and birds during the 1970s.

In 1972, a life-changing trip to California led to a lifelong love of the state, and he began visiting regularly and creating life-sized one-off welded steel owls, parrots, eagles and hawks which were an instant hit at street art shows across the States – he created over 380 original welded steel sculptures between 1972 and1990.

By 1990, he had moved to Los Angeles permanently, was living in a rented garage in Venice Beach, and had started designing and making his now famous bronze frogs.

He has designed over 200 limited edition bronze frog designs ranging from small tabletop and wall-mounted pieces to monumental sculptures, and including an annual Mother’s Day frog-and-flower tribute to his late mum, a floral art judge and horticulturist.

He has also recently returned to his roots, introducing a range of bronze birds, including his favourite, owls, parrots and kingfishers.

Come in and view Haddon Galleries

If you are not able to visit in person then why not take a virtual tour and see some of our fantastic artwork.

Take a tour
This site uses cookies: Find out more.